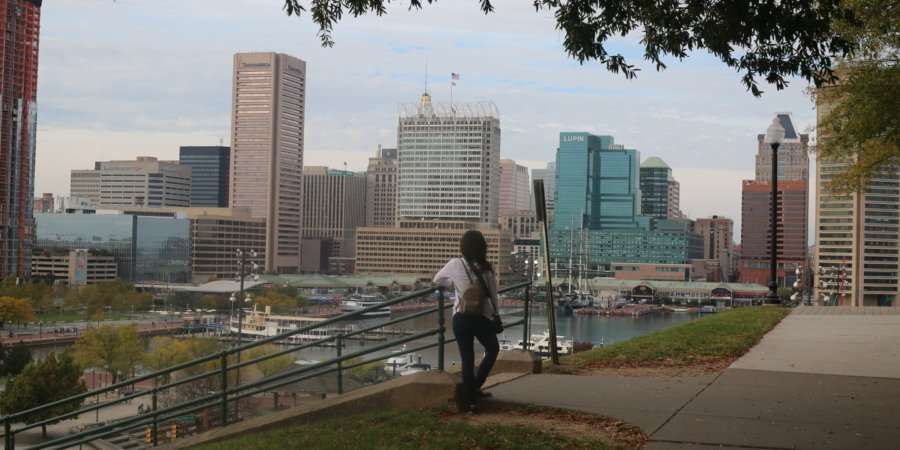 Baltimore is not a city that welcomed me with open arms. I really had to work for it. And since I wasn’t mentally prepared for what I was getting into, it downright tried my patience, pushed my buttons, and forced me into situations I wasn’t comfortable in. And I’m originally from New York.

But that’s not to say it was a wasted trip. Quite the contrary.

I definitely had my fair share of enjoyable experiences in Baltimore. I got to experience the rich art scene, try cream of crab soup (shout out to Bertha’s Mussels), and had my first Natty Boh, which is totally worth adopting the hipster lifestyle for, by the way.

But all of these things pale in comparison to the real experience Baltimore gave me, the kind of experience that will stick with me long after this trip is a distant memory.

When I returned home after the longest 2+ days of my life, it’s like I saw everything – my block, my house, even my husband – completely differently, but in the best way possible. It was then that I realized despite any hardships (or perhaps because of them), Baltimore actually made me a better traveler.

It Made Me Rethink Good Value

Good value is the Tuesday Bone-In Wing Special at Buffalo Wild Wings. It’s combining your children’s December birthdays into one joint party. It is not staying at the Motel 6 in Baltimore just to save a few bucks.

Maybe it was the stinkbug on the ceiling that greeted my friend and I when we arrived, or the fact that I awoke from a crippling nightmare that bedbugs had feasted on my arms and legs that told me I had made a poor decision. (Thankfully there were no actual bed bugs, but the sheer thought of them was enough to taunt my wild imagination before bed, apparently.)

Perhaps it was the fact that there was a group of people parked right next to our car – seemingly the only one in an otherwise desolate parking lot – blasting music and shouting right outside our door in the middle of the night. Or the fact that if I opened our door I’d be within arm’s length of them. Or the fact that when I later told my hubby the story he was shocked I didn’t know that there was obviously a drug deal being conducted. That clearly the most action those motel rooms got was from heroin addicts shooting up, a real “hit” and run, as they say. Either way, the place was bad news bears, and a mistake I soon regretted after the first bed-bug-toiling night.

But staying at that Motel 6 forced me to deal. To literally make my bed and lie in it. To get through the night. To figure out an escape plan (which I devised but didn’t end up using).  To decide which room items could be used as weapons in a pinch. The point is, it got the wheels turning. I guess you could say that I’ve been privileged enough to never have had an experience like this, so this was all new and scary. And I suppose the fact that there was a cop hanging out in the lobby on our final night was my cue to get some sleep.

Moral of the story? I will never rent a cheap motel room in an unfamiliar city unless I’m confident in its safety. But if somehow this happens again, I will not panic. I will channel Uma Thurman in Kill Bill.

It Made Me Tougher

One of the biggest issues I had here was the nagging feeling that people were invading my space.

As I mentioned, I’m originally from New York. I went to college in Philadelphia. I’ve seen homelessness up close and personal, but never has it been so up close and personal. In fact, personal space is not really a concept that exists here. I watched as people not only begged for money, but inserted themselves into open cars, unannounced.

When I walked around with my “fancy” Nikon outside of the touristy areas, I felt embarrassed by any status I may be projecting. I crossed my arms over my chest, head down, ashamed. I felt exposed. I felt eyes on me. I felt like a target. The last thing I wanted was to stand out. I wanted to be anonymous. To slip underneath the cracks in the sidewalk. But I didn’t. I couldn’t. I just stuck it out. Because that’s all I could do. That, and walk quickly. Just having to deal with that made me tougher. And I think I’d walk a little straighter the next time.

By the way,  if you’ve never been to Baltimore and decide to drive there, know this: When you stop your car at a red light, someone will wash your windows whether you want them to or not. And they will likely argue with you when you tell them to stop.

On the last day of the trip, one of many window washers started washing my car. I was a passenger at the time, but I did try to stop him. He snapped: “Shut up, it’s not even your car!”

“Actually, it is!” I shot back. It was, in fact, my car that my friend was driving.

Now, I’m not saying that this was wise. Who knows? Perhaps it was downright idiotic. But the point is, by the end of my trip, I had the courage to fight back.

It Made Me Appreciate What I Have

Never have I ever been so happy to come home as I was after this trip. My house seemed huge, my husband more handsome, heck, even the air smelled different (which I realize could have been the pot roast he was cooking). But either way, I appreciated my very existence. I felt like I had a chance to start over new. Better. Wiser. More capable than before.

Perhaps the biggest thing this trip prepared me for was my first solo travels in 2018. It’s something I’ve been thinking about for awhile but never had the courage to go through with. But this trip proved to me that I don’t need a man to protect me or to hold my hand. While it’s certainly nice to have at times, I’m now confident that I can hold my own.

So stay tuned, folks. It’s going to be a wild – but calculated – ride.

4 thoughts on “How Baltimore Made Me a Better Traveler”