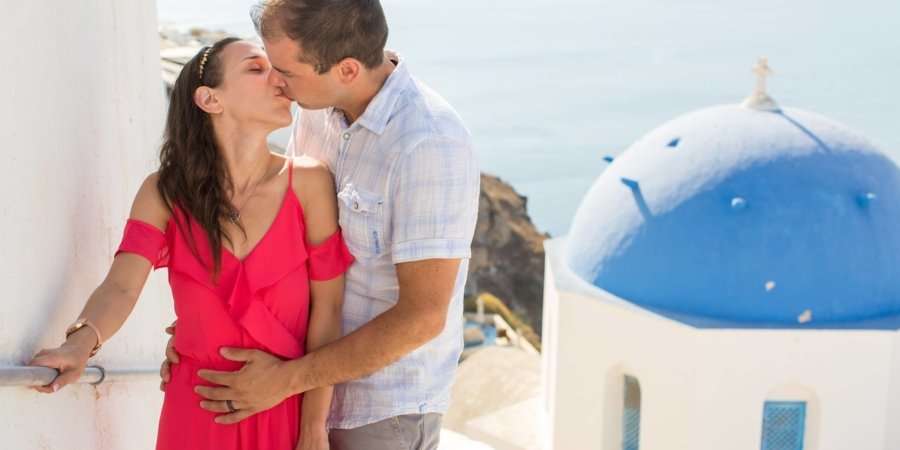 On August 19th, I married the love of my life at Onteora Mountain House in the beautiful Catskill Mountains.

Two days later, we embarked on the most amazing trip of my life, thanks to Petros Zissimos of Hellenic Holidays. That’s right, marital bliss led me to honeymoon heaven in gorgeous Greece, a.k.a my new favorite place on earth.

Here’s a recap of some of my favorite adventures with my new husband (love saying that!!)

If you’re a party animal, a beach bum, or just someone who enjoys the good life, you will fall in love with Magical Mykonos. From beautiful beaches to vibrant nightlife to delicious cuisine, Mykonos is a traveler’s playground.

Granted, I knew Mykonos would be a blast, but what I wasn’t expecting was:

FUN FACT: Mykonos is famously known as “The island of the winds.” My hat actually blew right off my head several times throughout our trip!

We stayed at the stunningly gorgeous Myconian Avaton Resort, perched above beautiful Elia (pronounced Ill-yah) beach. From the moment our shuttle bus turned the corner to our resort, we knew luxury awaited us.

I quickly adapted to our stunning surroundings and was ready for some R & R!

We spent our first magical evening at the resort’s fine restaurant next to the Suessical-looking “truffula trees.”

I had the most incredible ravioli as I watched the sun set over the island. I believe I uttered the phrase: “This is living” no less than three times over the course of the meal.

To top it off, the wonderfully accommodating restaurant staff even offered me a super chic pashmina for the chilly night air! It was all just so beautifully Greek.

After a fabulously restful night’s sleep – I’m talking one of the best of my life – we realized that we had slept through the hotel breakfast!

Although we were sad to miss it, it ended up being totally worth it because we landed at Elia Mediterranean Restaurant where I ate my Greek breakfast in front of the most vibrant blue water I’ve ever seen.

And the views? To die for.

Also, not really sure why, but the hotel theme was penguins. An interesting choice for Greece considering the climate, but just the same, they were super lovable!

My favorite part of Mykonos had to be Mykonos Town, especially the adorably picturesque area of Little Venice. Aptly named after the famous Italian city, Little Venice sits right on the pristine water.

Mykonos Town itself is incredibly charming. There are a bunch of windy streets decked out in beautiful Cycladic architecture and lined with adorable shops and incredible restaurants.

Not to mention these gorgeous pink flowers that drape luxuriously over everything with abandon, looking all sexy and photographable.

Yeah, it’s pretty hard not to be enamored by Mykonos’s charm.

The island is also known for its iconic windmills, most of which were built by the Venetians in the 16th century. Although they are no longer functional, they are still quite heavily photographed! (Obviously, we didn’t miss our opportunity!)

We then caught a ferry ride to Delos, an ancient island that is only reachable by boat. Delos has some really amazing scenery, my favorite of which was an ancient theater!

The thing that really blew my mind were the island cats, since someone brought them over by boat! Here are a few of the four-legged cuties we spotted.

Another favorite activity was beach hopping. Think of it like bar hopping, but instead of getting drunk on alcohol, you get drunk on beautiful beaches! For just €20 you can buy a day pass to hop around the beaches via water taxi.

FUN FACT: The water taxies have Persian rugs for drying your feet!

My favorite beaches were Elia and Platis Gialos, which had totally different vibes.

Elia Beach was much more relaxed and definitely more of a family-friendly spot. Overall, the sand was really nice (albeit a bit rocky, but that’s Greece) and we had designated umbrellas and lounge chairs as part of our hotel stay.

Platis Gailos was a livelier beach featuring a strip of restaurants and fun, upbeat music throughout the day.

We also visited Paradise and Super Paradise which are big-time party beaches (but not really our style).

Overall, Mykonos was an absolute blast, but after five days here, I was definitely ready for what everyone told me was a slower-paced and much more romantic island, Santorini. It did not disappoint.

I’ll admit it. Santorini seduced me.

It flat out gave me the eyes and put me in a hypnotic lover’s trance. (Don’t worry, my husband is fine with it.)

When we first arrived on this magical island via ferry from Mykonos, I truly thought we skipped over Santorini and headed straight for heaven. The ferry door opened and all I could see was a giant rock that stretched straight up into the sky. It was so spectacular that I actually stopped breathing for a moment.

You really can’t compare Santorini to any other place on earth. It truly is its own thing, and that sheer uniqueness literally and figuratively elevates it above everywhere else you’ve been.

Our hotel, Absolute Bliss in Imerovigli, was built right into the caldera and lived up to its name instantly.

We were escorted by a lovely staff member down about one hundred white steps to our honeymoon suite.

I seemed to float in and out of consciousness as she spoke. There’s just something hypnotic about the white washed structures against the vibrant blue water and sky that seduced me into thinking that I made it to the afterlife.

Did I mention we arrived just in time to catch the epic sunset? It was unbelievable.

As they say, a picture is worth a thousand words, so just imagine what a video is worth! Here’s one of me experiencing literal absolute bliss from our private hot tub that captivating first night.

On our first full day, we ventured out to the famous town of Oia, or as I like to call it: “Selfieville.”

Don’t get me wrong, it was absolutely stunning and everything they tell you it will be, but it was definitely the selfie hub/tourist mecca of Greece.

After walking through some souvenir-lined streets, we took the plunge (literally) by making our way down the caldera in about 95 degrees of still heat. The nice thing is that there is virtually no humidity, but don’t kid yourself, it was still disarmingly hot.

To give you an idea, I am not one to wear crop tops, but you better believe I made a makeshift one to battle the heat!

After lunch, we took a hike and found a popular cliff diving site. We didn’t jump in ourselves, but we did capture this guy mid-jump!

We attempted to wait for the famous Oia sunset, but after the crowds started building up, we decided to try catching it from our hotel instead. Once you see it, you’ll swear you never saw the sun setting before.

The following day, we headed out for one of my absolute favorite excursions of the trip – the Santorini Wine Tour. We visited three wineries and tasted twelve to fifteen (I lost count after the first few) fabulous Santorini wines.

I even managed to convert my red wine-loving hubby into a white wine enthusiast! Santorini is known for its whites as well as for some incredible wine making techniques, such as housing the bottles underneath the ocean!

Our tour guide Panos was WONDERFUL and amazingly knowledgeable about the history of Santorini and its famous wines. He captured some great moments of my husband and I enjoying the tour.

We also snagged a shot with Panos and the lovely couple we met on the tour. They had the same wedding date as us and were on their honeymoon, too!

The following day, we had another amazing adventure on the Caldera Catamaran Gold Sunset Cruise. We sailed around to the white, red, and black beaches of the island, capturing some great scenic shots along the way.

We even enjoyed a delicious barbecue meal made right on the boat!

After dinner, we enjoyed the amazing sunset right from the water. Pretty unforgettable.

Our final day in Santorini was bittersweet, but it definitely packed a lot of punch.

We then hiked into Fira, my favorite town in Santorini.

When we reached the far end of Fira, we took the cable car down the caldera …

…and then rode donkeys back up!

Normally people ride the donkeys with a group (and a guide), but ours kind of meandered away and did their own thing, so we enjoyed more of a private experience!

After our ride, we decided to indulge in some pampering with our first fish pedicure…

The island is known for these treatments, and it was certainly an experience, to say the least. It’s hard to describe the feeling, but it’s definitely very tickly as those tiny fish start nibbling away at the dead skin on your feet. My reaction was pretty priceless!

Then we ventured out to Kamari Beach, which was supposedly the only black sand beach with “real sand.” We soon discovered that sand can be loosely-defined as tiny black pebbles in Santorini…

In any case, Kamari Beach is a great town with many awesome restaurants along the boardwalk.

We finished off our day with a trip to the Open Air Cinema in Kamari for a viewing of King Arthur. The space was so beautiful and they had a full bar! What more could you want?

Nonetheless, we eventually adapted to the city pace and made sure to take in all of the awesome attractions that Athens has to offer. We stayed at NEW Hotel, which has been reimagined to include remnants from the former Olympic Palace Hotel.

We arrived to a heartfelt note from the hotel staff.

The next day we took a bus tour which brought us all around the famous historic sites. Odeon of Herodes Atticus was my favorite. The Foo Fighters have actually performed here!

We also visited the Parthenon, which is currently undergoing construction.

The Acropolis Museum was truly amazing. It is actually elevated to reveal the ancient civilization below; you are literally passing over history as you walk!

The tour ended with a trip to the beautiful Cape Sounion, located at the southernmost tip of the Attica Peninsula.

That night, we enjoyed a fabulous rooftop dinner at the beautiful Strofi Tavern with stunning views of the Parthenon. And yes, we were definitely upstaged by the ancient Greek architecture.

In my opinion, the best thing about Athens is that it serves as a gateway to some really unbelievable places.

We actually rented a car and drove about 2.5 hours out to the ancient city of Delphi and enjoyed some stellar scenery along the way – who knew Greece was so mountainous??

And Delphi itself…wow. Just wow. I’ll let the pictures speak for themselves.

We stopped for lunch in the quaint village of Arachova in Boeotia, Greece, which actually resembled Switzerland. There, my hubby enjoyed a Mythos, his go-to brew in Greece while I savored a refreshing Lemonada Loux.

On our final day, we decided to be more low-key and stay local. I had my first Aperol Spritz, which tastes like an alcoholic orange lollipop!

We also made sure to pick up some of the un-freakin’-believable olive oil to take home – I’m so spoiled now!

Our final night was spectacular and one of my favorite nights of the trip…and my life. We enjoyed unrivaled rooftop views at Mostrou Restaurant and Roof Garden where we reminisced about what an amazing trip it had been and mused about where we would go next.

Although there is much more of the world we are dying to see, we will definitely be returning to Greece to explore some of the other islands (and go back to Santorini!!)

Top on the Greek island wish list as of now:

In the words of my favorite travel writer Rick Steves: “Until next time, keep on travelin’!”