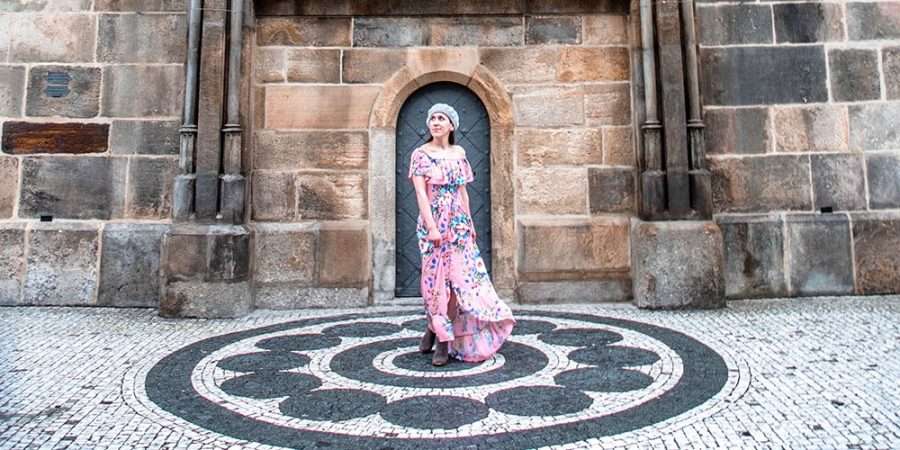 Spread the love
Last Updated on January 31, 2020 by epapp

While fairytale Prague may be somewhat “under the radar” in comparison to cosmopolitan Paris, it’s catching on quickly in the Instagram world. Considering that this city is a photographer’s dream, iconic Prague Instagram spots are not hard to come by.

So if you’re wondering where to go in Prague for those Insta-worthy shots, here’s some inspiration for your trip.

This post contains affiliate links. If you make a purchase using one of the links, I will earn a small commission at no extra charge to you.

Charles Bridge crosses the Vltava river, connecting Lesser Town with the Old Town. Construction began under the auspices of King Charles IV back in 1357 and was later completed in the early 15th century.

This Gothic bridge is made of stone and flanked with 75 beautiful Baroque statues, some of which date back to the 17th century. Today, many of the statues are copies, but the originals live in the Lapidarium.

Although cars and trams were once allowed over Charles Bridge, today it’s strictly pedestrian-only.

Arguably the most heavily photographed structure in all of Prague, Charles Bridge is the iconic and well-worn main artery through the city.

Personally, I find this bridge to have multiple personalities. It’s peaceful in early morning (save for the engagement shoots). By afternoon, it’s like walking through a Woody Allen film (jazz music and all). Come nightfall, it’s truly cinematic (and typically mobbed). It’s hard to say which personality is my favorite; each lends its own charms.

PHOTO TIP: Get here early! Of all the Prague Instagram spots on this list, Charles Bridge is arguably the most crowded. Try to come right before sunrise. Once 7 AM hits, it will start turning into a tourist mecca.

If you’re arriving by public transportation, the three best options are:

First installed in 1410, Prague’s Astronomical Clock (Orloj) is the oldest astronomical clock that’s still working today. It’s also the third oldest of its kind in the world! In the 600 years since its origination, the clock has been narrowly saved from destruction multiple times.

It tells the time, date, position of celestial bodies, astronomical cycles, and Christian holidays. Every hour between 9 am and 11 pm, the clock provides a theatrical show and the twelve apostles appear.

Personally, I didn’t stick around for the show because this area tends to get mobbed just before the hour. I suggest watching Rick Steves Prague from the comfort of your couch if you don’t want to be swarmed. Fast forward to minute 6:06 in the video to see the Astronomical Clock.

PHOTO TIP: Although a must-see as far as Prague Instagram spots go, it can become tourist-infested as early as 7:30 AM. Get here early if you want a shot without other people in it. Ideally, arrive before, during, or just after sunrise.

For an alternative viewpoint, walk around the side of the clock and shoot the Old Town Hall, pictured below.

Church of Our Lady before Týn

The Church of Our Lady before Týn was built in the 14th century on the site of a Romanic church. As the new church was being built, the old one gradually disappeared. However, since houses stood in front of the original church structure, the new cathedral had to be built behind them.

Legend has it that the Týn Church Towers inspired Walt Disney to create Sleeping Beauty’s Castle, but this hasn’t been proven. Today, the church is considered the heart of the Old Town.

The Church of Our Lady before Týn was the main structure that inspired me to visit Prague. She’s beautiful in the morning, but really comes alive at night with lights! I highly suggest having dinner outdoors in the Old Town – albeit touristy – just to enjoy her magnificence!

PHOTO TIP: If you want to experience the Church of Our Lady before Týn in all of her glory, get here early! My photos were taken a little before 7 AM. After this time, it starts to become crowded with engagement shoots, followed by full-fledged tourist mobs.

At the edge of the Old Town, the Powder Tower is one of the most significant monuments of Late Gothic Prague. First built in 1475, it was once the monumental entrance for Czech Kings entering the Old Town.

As its name suggests, this tower was originally used to store gun powder. Although it was damaged during Prussian occupation in 1757, it was later rebuilt between 1875 and 1886.

After my first solo trip to Prague, I learned that visitors can actually go inside the Powder Tower. If you’re up for it, you can climb the 186 interior steps for incredible views over the Old Town. You can check out the entrance fees here. I will have to experience this for myself on a future visit!

PHOTO TIP: As with most Prague attractions, it’s always a good idea to get here early. Although it’s arguably not as popular as, say, the Astronomical Clock, the surrounding streets fill up with tourists pretty quickly.

To capture the Powder Tower in all of its glory, crouch down and shoot up at it. If you’re shooting with a tripod, position it low to the ground and angle it up.

If you’re looking to take the iconic fairytale photo flocked by swans, Park Cihelná is a must. Located on the Malá Strana side of the Vltava River, this area gives you a beautiful vantage point of the Charles Bridge and some feathered friends.

PHOTO TIP: Despite their gentle looking appearance, swans can be rather aggressive and are prone to biting when aggravated. I actually witnessed one chomping down on another one’s back mid-shoot, so exercise caution!

If you’re thinking of feeding them so that they flock to you, check out this resource first for swan-friendly feeding. I made the mistake of feeding the swans bread, which I later learned can aggravate their digestive systems.

If you’d like to feed them, read any posted signs first (none existed while I was there) and be prepared for a flock of pigeons as well!

The address for Park Cihelná is 118 00, 118 00 Malá Strana, Czechia. You can find walking directions to Park Cihelná from Charles Bridge here.

If you’re traveling by underground Metro, get off at the Malostranská stop.

Founded in the 9th century, Prague Castle is the largest castle complex in the world, according to the Guinness Book of World Records. It consists of an entire complex of historical palaces, offices, churches, fortifications, courtyards, and gardens.

What was once the seat of the kings of Bohemia became the official residence of the President of the Czech Republic.

Prague Castle is enormous and it truly deserves more than a quick photo for Instagram. I suggest doing a tour so that you can really appreciate all of the buildings that make it up.

To learn more about what to do in this area, check out my guide to the Prague Castle District.

PHOTO TIP: If you have limited time or don’t want to pay the entrance fee, there are some free photo opportunities around Prague Castle.

If you’re a door lover like I am, I suggest stopping by the Archbishop Palace, pictured below. You’ll find it just to the left of the Prague Castle gates. To avoid crowds, I suggest getting here around 7 AM or after 5 PM when they tend to thin out.

You may notice that almost all of these iconic spots are located in Prague’s Old Town. Considering that this is the most touristy section of the city, Old Town is where you’ll find the majority of sights you see on Instagram.

You can also download two bonus spots here for free so you don’t miss a golden photo opportunity while in Prague!

Here’s to knocking those Instagram shots out of the park in this fairytale city!

Did you find this post useful? Pin it to your boards!