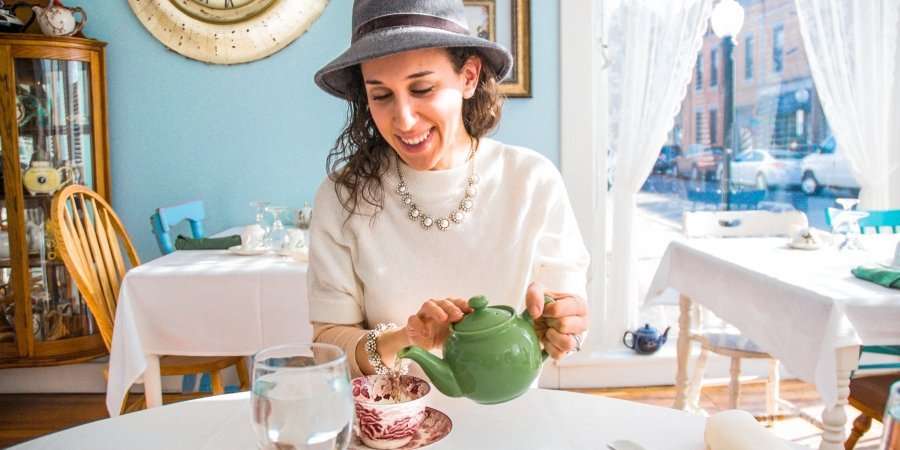 A few weeks back, I was followed by a foodie on Instagram.

Now, if you’re at all familiar with my non-foodie ways, you’ll know this doesn’t typically “move the needle” for me, as they say.

What can I say? The colorful confections taunted me and I needed more.

The real reason I’m bringing this foodie account to your attention is for the same reason you’re reading this post right now: high tea.

“Oh wow,” I thought, as I looked longingly at her beautiful three-tiered porcelain tea tray topped with perfectly powdered pastries.

“Must be fun to go to England.”

Normally, I wouldn’t have given it a second thought.

After all, my trip to Spain is already booked (just two more months to go!), so England will just have to wait.

…But just for fun, I clicked the photo to check out her location, which I was surprised to see was Canada.

Then the wheels started turning.

Just for the heck of it, I googled “high tea Connecticut” to see if there was even an outside chance that I could try it in my home state.

Much to my surprise, one of the first results was Tea with Tracy, an adorable little tea house in Seymour, Connecticut that served high tea! (Technically, they refer to it as “afternoon tea,” but it’s the same exact concept.)

Well, with my birthday quickly approaching and no official plans for how I wanted to celebrate turning 25 (again), I was suddenly inspired!

Fast forward two weeks (and two very satisfied tea patrons later), and I’m going to share some takeaways in the hopes of inspiring your own royal experience, no passports required.

Before we get any further, I thought it would be a good time to discuss a little history of what high tea even is anyway…

Although no one is sure exactly when it was first introduced to England, the ceremony of high tea became widespread in the 1840’s thanks to Anna Maria Belford, Duchess of Belford.

Served between three and five o’clock, she introduced this afternoon meal to the leisure classes for the purpose of curbing hunger in between lunch and dinner. Since the evening meal wasn’t typically served until eight o’ clock or thereabouts, high tea would quell hunger spells before, say, a long evening at the theater.

The 1920’s represented the height of this high tea craze, chock full of the works: throngs of guests, servants, silver tea pots, fine linens, musicians, and of course, the star of the show, the world’s finest teas.

Since that time, it has gained tremendous popularity and spread across the globe. Much to my delight, today it brings a smile to non-British residents as well!

Shine a Light on Your Winter Funk

I don’t know about you, but winter puts me in a funk like no other season can, and despite being a January baby, I am the polar opposite of a “winter person.” It’s hard enough to get me out of the house when it’s cold, let alone to participate in “fun” winter activities.

So without even realizing it, having a high tea experience in the winter was just what the doctor ordered.

Part of the reason for this is obvious: tea is hot and it warms you to your core.

But honestly, it was deeper than that for me.

In addition to tasty tea and fancy finger foods, the experience itself helped tremendously to break up the “winter funk,” i.e. short, cold, dark, depressing days.

I suddenly wished to be a cat who could curl up on the windowsill and feel the sunshine beam down on my fur.

Although I can’t speak to the exact design and aesthetic of other tea houses, I’m willing to bet you that the vibe is just as welcoming as this one was, a.k.a exactly what you need to get through this last stretch of winter.

Most people equate pampering with getting a massage or a manicure, and while I love those things just as much as the next person, I have to say that high tea pampers you in a completely different way. It nourishes your soul.

First off, there’s the tea selection.

Tea with Tracey, in particular, has over 220 flavors all listed out in a giant menu.

That’s enough to try a different flavor of tea every day for over seven months!

Then there’s the three-tiered tray.

Truthfully, you could serve my least favorite food on this and I’d probably be tempted.

So just imagine how irresistible it is when it’s loaded with delectable finger sandwiches and cute confections!

Then, of course, there’s the sweets.

Now I’m not condoning that you eat yourself into a confectionary coma. In fact, I left feeling perfectly satisfied (and not at all disgusted with myself).

Part of the appeal is that everything is served tastefully in moderate portions that are meant for sharing. Think of it like sampling and nibbling more than gorging.

On top of that is the service.

I don’t know if working around tea makes one generally more relaxed and pleasant, but there was never a sense of being rushed. The emphasis was definitely on the enjoyment aspect. To be honest, it felt very European, albeit in Connecticut.

Between the incredible variety, the beautiful display, the delicious delicacies, and the stellar service, you’ll feel pampered just by sitting there.

I’m pretty new to the world of tea, but now I see that you really can have your tea and drink it, too – all without leaving the country (and probably even your state)!

If you’re interested in having your own high tea experience without hopping on a plane, I’d suggest a simple Google search for tea houses in your local area. You’ll probably be surprised by what you find, and possibly even uncover some hidden neighborhood gems you weren’t aware of.

Here’s to warm bellies, tickled tongues, and satisfied souls for the remainder of winter.

Bottoms (and pinkies) up!

Did you find this post useful? Be sure to pin it to your boards!

2 thoughts on “The High Tea Experience: Live Like Royalty Without Crossing an Ocean”