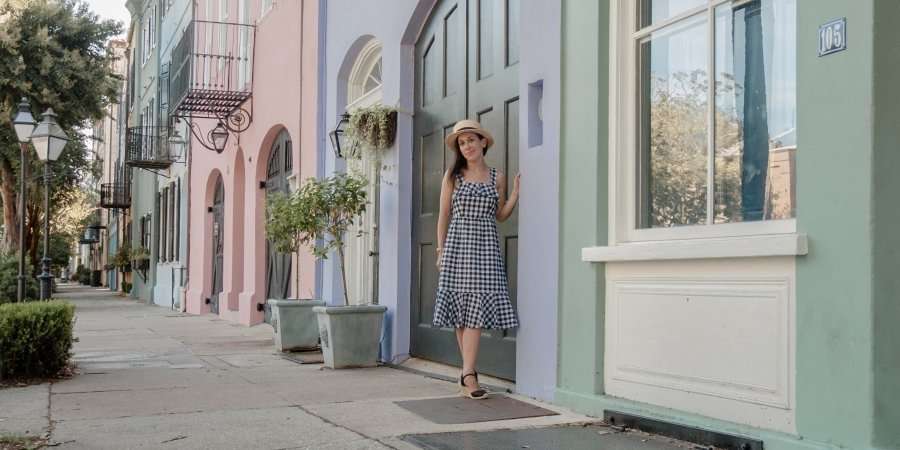 After spending a fun-filled weekend in Charleston, it has stolen my heart – and a spot amongst my favorite U.S. cities. This charming, well-preserved city has exceeded my expectations in so many ways.

First off, I was surprised by how “un-Southern” it felt, in the absolute best way possible. While it definitely brought the Southern charm, it didn’t have the sluggish pace I often associate with southern cities.

I did initially approach it with a bit of cautious optimism, but I quickly found myself falling for its charms. It checked off so many boxes for me, from stunning architecture, to delicious food, to nearby beaches.

Walking around the cobblestone streets, I was transported back to my college days in Old City Philadelphia. I couldn’t help but marvel at one of the rare Colonial cities that still stands strong after the Civil War.

If you’re looking to enjoy a fun-filled weekend in Charleston yourself, here are my top suggestions for your stay.

My Top 5 Suggestions for a Fun Weekend in Charleston

Spending a weekend in Charleston and not seeing Rainbow Row is like going to Paris and skipping the Eiffel Tower. It’s kind of a no-brainer.

This charming strip of thirteen colorful houses is actually the longest cluster of Georgian row houses in the United States.

It should come as no surprise that these lovely homes are the setting for many a photoshoot. I actually witnessed several of them in my short time here!

Speaking of, I learned an important lesson about photography while on this trip. While I often try to shoot early morning for better light and less crowds, 9:00 a.m. was not early enough. In fact, it’s probably one of the worst times to shoot.  The sun (and its accompanying shadows) will not be your friend.

My husband and I ended up reverting to Plan B: shooting in the late afternoon. This plan was much more successful in terms of achieving a flat, even light.

Of course, the downside of shooting later is that you’ll have to negotiate the space with other eager photographers.

However, compared to the crowds I’ve experienced in major tourist cities like Barcelona or Prague, for example, this was very mild. That really surprised me  about this popular city. I was in central areas in the morning, afternoon, and evening, and never found it to be overly-crowded at any of those times.

That said, if you really want those early morning shots, I’d suggest getting here no later than 7:00 a.m.

Magnolia Plantation was hands-down the highlight of the trip for me.

Located across the Ashley River from North Charleston, it’s one of the oldest plantations in the South.

Unsurprisingly, Magnolia Plantation is a popular wedding destination. I personally couldn’t imagine a dreamier place to exchange your vows! (And considering that I was visiting with my hubby for our wedding anniversary, it was the perfect place to hit.)

The on-site house and accompanying gardens is open daily to visitors, and general admission is $20. You’ll pay an additional $8 for access inside the house. There are several other options you can add-on as well, such as taking a nature boat to see gators.

My hubby and I unexpectedly saw a gator ourselves whilst on the plantation’s beautiful foot bridge! That bugger slipped right under the bridge just as I was standing on it!

This is not something you ever see in Connecticut, that’s for sure…

Although I wasn’t a Magnolia Plantation bride, I certainly took enough photos at this dreamy place to qualify as one!

If you don’t make it here during your weekend in Charleston, there are a number of other plantations to consider.

One of Charleston’s calling cards is the authentic Southern food. Let’s just say, if I was wearing a belt, I would’ve needed to unbuckle it more than once!

The food here was delicious, and I barely even scratched the surface of my insanely long recommendation list.

My two favorite places for dinner were Magnolias and HUSK. Both of these are more upscale than a typical Southern joint you may imagine, particularly Magnolias. You should definitely dress comfortably, but with “Southern class” in mind.

I ordered the fried chicken and was not disappointed. The drink menu was also divine. I had a cocktail with fresh rosemary and it was one of the best drinks I’ve ever had. It was the perfect way to cool off after that serious South Carolina sun.

FUN FACT: Our server actually commented that the summer weather was very mild compared to what they’re typically used to down there. Ha! Try telling that to my sweat-stained dresses!

In any case, the service was exceptional and beyond what I’m typically accustomed to.

HUSK is actually a chain, with locations in Charleston, Greenville, Nashville, and Savannah. One of the most special parts about this restaurant was the venue itself: a stunning former Victorian-era mansion. You can’t get much more Southern than that!

The food here was amazing for sure, but it’s undeniably a meat-lover’s paradise.

I wouldn’t suggest it if you’re vegan/vegetarian because you’d be hard-pressed to find something without some meat in it. Even the butter for the bread was infused with pork, for example.

However, if you’re a carnivore, you can’t really go wrong. I can personally attest to the duck (my order) and the steak (my hubby’s).

How to Get to Magnolias & HUSK:

One of my favorite things about Charleston is the city’s close proximity to a number of beaches and barrier islands.

The Isle of Palms is located on a slender barrier island and is known for its beaches, waterfront condos, eateries, and colorful murals.

Only about a half hour drive outside the city, this laidback beach town is perfect for families.

For a livelier, more hip vibe, you have to check out Folly Beach. It has a beautiful Insta-worthy pier and is especially stunning around sunset.

There’s a very casual beach restaurant right above the pier (think picnic tables and Solo cups). We didn’t eat here, but it looked like the perfect location for enjoying a casual bite as the sun goes down.

Honestly, there’s no shortage of restaurants on Folly Beach; just take a quick stroll and you’ll have plenty of options. We landed at Rita’s Seaside Grill, a barbecue/American-style restaurant with great vibes and live music.

I was also a big fan of The Lost Dog Café, which we went to for breakfast the following morning. If you have a certain four-legged family member with you on the trip, this is the perfect spot!

You can even grab a mini bone for your pup on your way out (think an “after-dinner mint” for dogs)!

How to Get to the Aforementioned Places:

The French Quarter is a small neighborhood on the Southeastern corner of the peninsula, and arguably the most charming section of the city. It’s surrounded by Broad, Meeting, East Bay, and South Market streets. Its name is derived from the French Huguenots who immigrated to the area.

This little slice of the city is rich in history and beautiful architecture. I could’ve spent full days wandering the streets and would never have gotten bored! Beautiful pastels, charming shutters, and detailed carvings abound in this darling neighborhood.

At night, the French Quarter is illuminated by beautiful gas light lamps giving it an eery glow. Not unsurprisingly, this historic area is famous for evening ghost tours. Sadly, I missed the spirit search during this visit, but now I’ll have an excuse to go back!

How to Get to The French Quarter:

Did you find this post useful? Be sure to pin this to your boards for a fun weekend in Charleston!