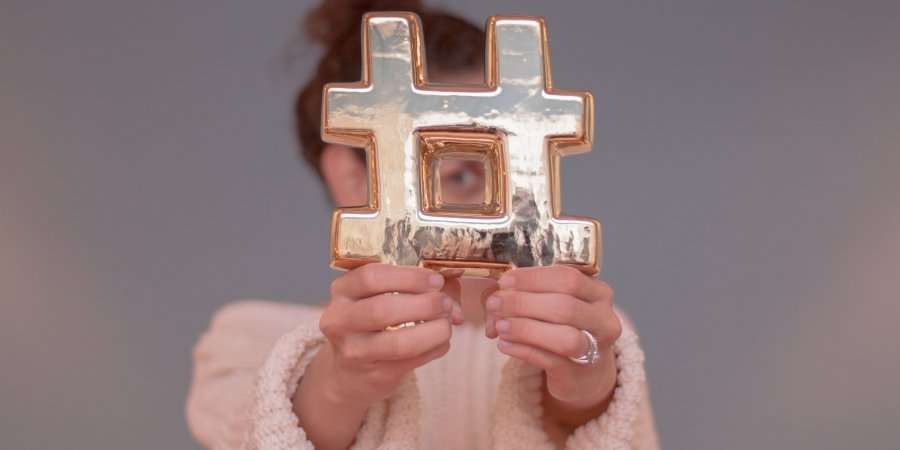 Hashtags are to Instagram what keywords are to Google. They help you get discovered on an exceptionally crowded platform.

But if you’re misusing them, skimping on them, or straight up skipping them altogether, you’re doing your account a huge disservice.

And with today’s increasingly aggravating algorithm, us baby accounts need all the help we can get.

Here are some of the most common hashtag faux pas that might be stifling your account and keeping you from growing.

Are you committing any of these social media sins?

Have you ever scrolled through a popular hashtag for Italy and found a picture of a lampshade?

Okay, so maybe that wasn’t the exact scenario, but you get the idea.

Using irrelevant hashtags is not only unprofessional, it’s annoying (and kind of cheating).  When people search for a specific hashtag, there’s an expectation that they’ll find the thing they’re looking for (imagine that)!

If you’re frequently using hashtags that have nothing to do with your pictures, you might stand out – but not in the way you’re hoping for. And let’s just say the chance that someone will follow you from that method is rather slim.

Another problem with using irrelevant hashtags is that someone can essentially “flag” you by selecting “Don’t show for this hashtag” when your post doesn’t fit the tag. The more people do this, the more your reach will shrink, which is something few of us can afford.

So what type of hashtags should you include in your posts?

A hashtag should be directly related to your content. If, for example, you’re posting a picture of a mountain, hashtags related to landscapes, nature, and adventure travel could all be relevant, provided the right circumstances.

If you find you could use some hashtag inspiration, consider the following when you post:

Similar to wanting to be part of the “cool” crowd in high school, hashtags are essentially a way to vie for popularity.

Unfortunately, unless you have a large (or moderate) following, you’re not going to be “in” with the most popular kids right off the bat.

When it comes to hashtags, you really need to run with your own crowd. Prom King or Queen isn’t a status that’s bestowed overnight.

This might be a little confusing in practice, so let’s break it down.

Think of hashtags like Google keywords. The more popular the hashtag, the harder it will be to “rank” for. So, if you have 1K followers and you’re using hashtags that ten million other people are using, your post will disappear from the recent hashtags in a matter of seconds as all the latest posts start rolling in.

In order to make it to the “Top” hashtags – and eventually to the Explore page – you need to focus on hashtags that you actually have a shot of ranking for. These will be much smaller ones when you’re just starting out.

As a general rule of thumb, start by using hashtags with about 30K – 100K reach and see where that gets you. While these aren’t as popular, they give you a greater chance of getting noticed within that circle, so to speak. Plus, you can ensure they’re more narrowly targeted to the people you’re trying to reach.

This being said, it’s a good idea to use some of the bigger, more popular hashtags in moderation. These can help you expand your reach, which is critical when you’re in the early stages of growing your account.

But instead of using the gigantic ones, try aiming for around the one million range.

3. You're Repeating Them Too Much

Another common hashtag faux pas is regurgitating the same ones over and over again. While it may be easy for you to quickly copy and paste your hashtags from one post to another, it can severely limit your reach.

When you continue to use the same hashtag grouping repeatedly, you’ll continue to show your content to essentially the same people over and over again, and your posts won’t be seen by fresh eyes.

Repeating hashtags too much can also come across as super spammy, turning off your existing audience (or would-be followers).

That being said, it is advisable to mirror success as much as possible. If you have a business account – which I highly recommend getting if you’re serious about Instagram – you can look at the insights for each of your posts to see your hashtag reach. I’ve found these analytics to be incredibly valuable in terms of which hashtags to recycle versus which ones to drop.

If you don’t have a business account, you can easily switch to one using this step-by-step guide.

4. You’re Not Using Them to Their Full Potential

Although this is a heavily debated topic and there’s no one “magic number” that will work for everyone, to me, thirty hashtags means you have thirty chances to be seen. Why wouldn’t you want as many opportunities as possible?

Some will argue that this looks spammy and that you should only use about ten (or less than ten), but I’ve personally found when I use less than thirty my engagement suffers.

If you’re torn on how many to use, try experimenting with different amounts until you find your account’s sweet spot.

If you’re waiting until four seconds before you post to slap on some hashtags, you’re doing your content an injustice.

When hashtags are slapped on to the end of your caption as an afterthought, you’re bound to use ones that aren’t relevant, miss out on potential opportunities to get discovered, and perhaps even make some spelling errors.

You always want to research your hashtags before using them.

Finding which hashtags are right for your account will definitely take some time, so you shouldn’t expect overnight success. The best things to do are research your options, check out what others in your niche are doing, experiment, and analyze your results over time.

Need some help getting started with hashtags? Drop me a line and let’s chat!

Did you find these tips useful? Don’t forget to pin this post to your boards!