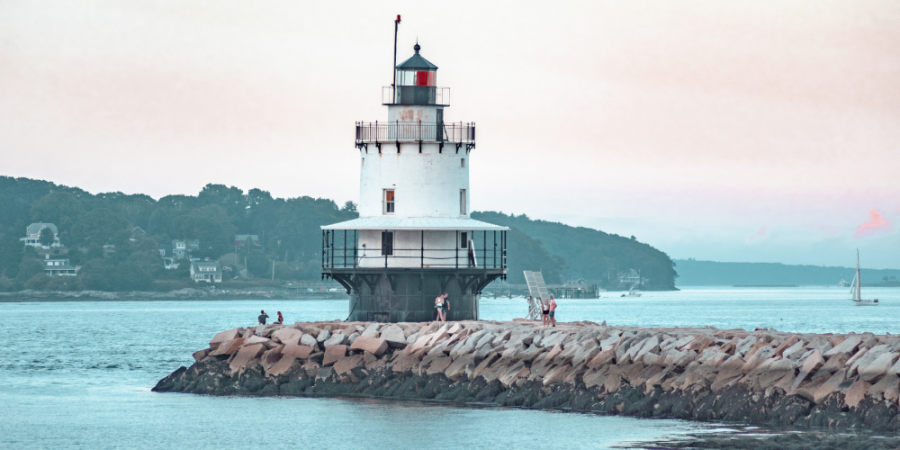 Nothing exemplifies the state of Maine quite like its gorgeous lighthouses…

…Well, maybe the lobster roll, but the iconic lighthouses in Portland are a close second!

Fortunately, my husband and I recently satisfied my lust for lighthouses with a fun road trip to the Pine Tree State.

We started with an amazing day at Acadia National Park and then drove south to see the famous Portland lighthouses for ourselves.

Our successful lighthouse mission inspired this guide – and all of the native-New-Englander-insight contained within.

Here’s the full roster of lighthouses in Portland, from the oldest state icon to an ancient-Greece-inspired bug light!

A Brief Word on the Portland Lighthouses

There are six lighthouses in Portland, all of which are located within a 20-minute drive of the city.

However, this count includes a set of twin lighthouses, so this numbered list ends at five.

Head here for the most convenient driving route to all of the lighthouses in this guide.

The Most Iconic Lighthouses in Portland

Portland Head Light is arguably the most iconic lighthouse on this list – and for good reason.

If you only have time to visit one of these lighthouses in Portland, the Head Light should be it.

This historical gem is the oldest lighthouse in all of Maine and was first lit in 1791.

Today, it’s owned and lovingly managed by the Town of Cape Elizabeth, located just seven miles outside of Portland.

It sits along the breathtaking shores of Fort Williams Park and features an award-winning museum (previously the keepers’ quarters).

In addition to a striking lighthouse and a picturesque red-roofed museum, the surrounding seascape is absolutely spectacular.

Unlike some of the other Portland lighthouses on this list, the Portland Head Light can be captured from various angles.

The “prime spot” can be accessed by walking down the right-hand side of the lighthouse. You’ll eventually notice a little opening with some stone steps as you walk along the path. Here, you’ll get a panoramic view of the dramatic coastline and witness waves crashing against the rocky lighthouse base.

Although this is typically the favorite photo spot, it’s far from the only one. You can also capture the lighthouse directly as you enter from the parking lot.

Additionally, you can also photograph it from the opposite side by taking the cliffside path that leads left. Although you won’t capture the dramatic waves, you’ll be able to shoot massively impressive rocks instead.

Fort Williams Park is open daily from sunrise to sunset.

Although there’s no admission fee, you’ll need to pay for parking. In addition, donations are always appreciated.

PRO TIP: The rockier left side of the lighthouse is steep and can be tricky to navigate, particularly if you come across slippery rocks. Watch your step and skip the flip-flops here. Instead, wear shoes with adequate traction and watch out for dark rocks, as those tend to be the slippery ones.

While at the Portland Head Light, you’ll actually be able to spot the Ram Island Ledge Light off in the distance.

Unfortunately, this is one of the lighthouses in Portland that you’ll need to admire from afar. It’s accessible by private boat only and the bare ledge/island it sits on is located about a mile offshore.

The structure dates back to 1855 and was historically feared by local mariners. This is because its low visibility was responsible for a number of shipwrecks.

As a result, it underwent a series of navigational aid upgrades over time. This included everything from an iron spindle addition in 1855 to a 50-foot wooden tripod in 1873.

In 1902, Congress appropriated funds for the building of a lighthouse on Ram Island Ledge. The following year, the federal government purchased the ledges from two Cape Elizabeth families.

Construction was completed in 1905 and an iron pier was added to the ledge. This marked the collection of sharp, jagged rocks near Portland Harbor’s outer entrance.

Following suit, a kerosene lamp was first lit in January of that year.

Today, the lighthouse is solar-powered, as of 2001.

You can read more about the Ram Island Ledge Light’s interesting history here.

PHOTO TIP: Since you won’t be able to get very close, I recommend using a telephoto lens (70 – 200mm) when capturing this lighthouse from Portland Head Light. This will pull the lighthouse in closer, making it appear more dramatic (and less ant-like).

Two Lights State Park is made up of 41 acres of rocky headlands and is the vantage point of the only “twin” lighthouses in Portland.

The eastern lighthouse is an automated light station that’s visible from 17 miles out at sea and still active today. The western lighthouse stopped running in 1924 and is a private home today.

The park opened in 1961 and offers views of both the Atlantic Ocean and Casco Bay.

The area was originally the site of a World War II coastal defense installation. Today, visitors can still see an observation tower as well as several bunkers located throughout the park.

Many visitors walk the easy, almost 2-mile hike of intersecting footpaths within the park. The trails range from gravel to unimproved forest floor, including rocks and exposed tree roots.

FUN FACT: The park was named after the twin lighthouses located at the end of Two Lights Road. They were the first twin lighthouses erected on Maine’s coast back in 1828. One of the towers was featured in Edward Hopper’s famous work: “Lighthouse at Two Lights.”

Note: Neither of the lighthouses is located directly in the park itself and both are closed to the public.

Unfortunately, we only found a vantage point of one of the lighthouses from the park, as we were short on time.

PHOTO TIP: I recommend using the park’s pretty vegetation to frame your shot. We also used our telephoto lens here to pull the lighthouse in closer.

Unfortunately, you can’t access these lighthouses in Portland directly, since both are located on private property.

However, you’ll be able to see them from Two Lights State Park. (Again, we only found one, as we were in a bit of a hurry.)

Additionally, there’s apparently another good vantage point to capture the lighthouses. To reach it, navigate to 225 Two Lights Road in Cape Elizabeth (The Lobster Shack at Two Lights). However, we didn’t venture here ourselves.

Two Lights State Park is open year-round from 9 AM until sunset, unless otherwise posted at the gate.

Although we were exempt from paying (presumably because of the current world situation), there’s apparently a fee under normal circumstances. You can access the day-use fee information here.

Spring Point Ledge Lighthouse is constructed in the caisson style. It’s situated at the end of a 950-foot breakwater on the Southern Maine Community College South Portland Campus.

This beautiful South Portland symbol was originally built in 1897 to warn mariners of a dangerous ledge in Portland Harbor.

You can read more about the lighthouse’s history here.

FUN FACT: Spring Point Ledge Lighthouse is the only lighthouse accessible by land!

While the U.S. Coast Guard maintains the aids to navigation, they transferred ownership to the Spring Point Ledge Light Trust in 1998. This public charity is an all-volunteer 501(c)(3) and is committed to lighthouse preservation.

PHOTO TIP: This lighthouse is truly a photographer’s dream! The layout lends itself to an impressive “leading lines” shot where you can draw the eye.

If you’re coming for a sunrise/sunset shoot, allot extra time, as it will take a bit to get in place.

The stones leading up to the lighthouse are huge and there are gaps in between them. Be careful while navigating and avoid high heels!

Spring Point Ledge Lighthouse is one of the rare lighthouses in Portland that offers tours. Typically, this is an awesome opportunity to experience history and navigate the inside of a working lighthouse.

However, given the current world situation, tours are currently canceled for the foreseeable future.

In the meantime, you can enjoy a virtual representation of the lighthouse here.

Last – but definitely not least – is the cutest contender on the list: Portland Breakwater Lighthouse!

Also known as “Bug Light,” it dates back to 1855 and was originally a wooden structure marking the breakwater shielding Portland Harbor.

Admittedly, I wasn’t expecting much when I first discovered the Bug Light online, as it’s the smallest on this list.

However, I can now say I definitely misjudged, as it ended up being one of my favorite lighthouses in Portland!

This little gem sits in Bug Light Park – affectionately named after the structure – and can be enjoyed at various distances.

Its unique design resembles a 4th-century Greek monument, as it was inspired by the Choragic Monument of Lysicrates in Athens. However, it was built with cast iron plates painted white.

It was added to the National Register of Historic Places in 1973 and memorializes ship building efforts of WW II.

PHOTO TIP: Although you can access it up close, I recommend shooting from the surrounding rocks to capture the lighthouse in full.

We captured our photos with a 50 mm prime lens.

This park offers free and convenient parking so that visitors can easily access the lighthouse.

Many visitors also choose to explore the South Portland Historical Society Museum, adjacent to the park.

Although the museum is temporarily closed, you can plan a future visit here.

I hope I’ve convinced you to add some – if not all – of these Portland lighthouses to your itinerary!

Additionally, if you have more time to spend in Maine, I highly recommend driving up to Acadia National Park.

Even if you’re on a tight schedule, this stunning national park is still totally doable in a brief time. Fortunately, I’ve put together a 1-day Acadia itinerary to help you plan your trip.

In the meantime, I’d love to know if you’ve visited any of these iconic lighthouses in Portland. Let me know about your experience in the comments below!

Did you find this post useful? Pin it to your boards!